A cash-strapped dad from Naga City who has recently gone viral after he resorted to bartering chickens online to buy his kids’ school gadget lost all his money to an online scam.

Rommel A. Enriquez, 46, from Brgy. Carolina in Naga City, Camarines Sur, took to Facebook his terrible experience, reeling with heartache for losing his money amounting to P6,500 to swindlers; they got to him through social media on Saturday, Sept. 19.

In a series of posts, Enriquez showed screenshots of his conversations with the alleged swindlers who messaged him about a cash aid from the Department of Social Welfare and Development (DSWD), which was supposedly sent to him via mobile money or “e-money” service.

(Someone called and sent me a friend request. After that, my GCash money was gone. They consumed my profit from the rabbits I sold to pay for the workers.) 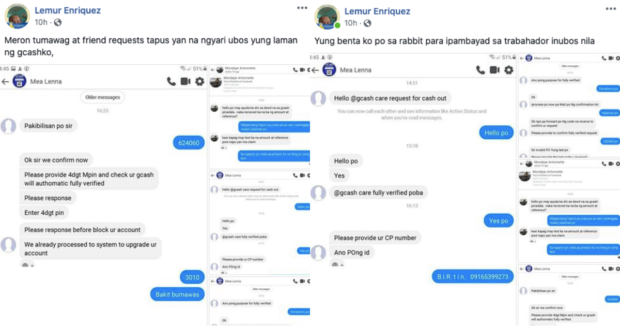 (Hello, you also have a cash aid from DSWD sent on GCash. Have you received the amount and reference number?)

Enriquez responded to Mondejar telling her that he did not receive the money yet. Mondejar then insisted that if Enriquez receives a text message with an amount and a reference number, the money could be claimed already.

Shortly, after his conversation with Mondejar, a Facebook user named Mea Lenna also messaged Enriquez and introduced herself as a “care request [specialist]” of the known financial service provider.

Initially, Lenna asked Enriquez if his e-money account is fully verified and requested him to provide her with his cellphone number and identification information. At that moment, thinking it was a legitimate transaction, Enriquez got swayed and sent her his number.

As the conversation went on, Lenna claimed she is already processing Enriquez’s request. The woman also asked him to forward to her the “code” that Enriquez would receive so she could confirm the request and proceed with the transaction.

Meanwhile, when it seemed like the first code was supposedly invalid, Lenna messaged Enriquez once more, saying, “Please provide the last code you received.”

Later on, Lenna said the account has been confirmed and asked Enriquez to quickly provide her his four-digit mobile personal identification number (MPIN). She also told him to check his e-money app afterwards as it will “[automatically be] fully verified.”

Lenna then asked Enriquez again to give her his four-digit MPIN before the account gets blocked: “We already [processed] to [the] system to upgrade your account.”

As soon as Enriquez sent Lenna his four-digit MPIN, he suddenly noticed that all his money disappeared from the app.

In an interview with INQUIRER.net, Enriquez said he has not received any responses yet from the alleged swindlers after his money was taken from him. He even could not search Lenna’s Facebook account anymore, while Mondejar, whose Facebook account remains active as of writing, is not responding to Enriquez’s messages.

When asked if he had received some notifications of recent transactions made using his e-money account, Enriquez confirmed that there were several transactions that have already been made by the swindlers.

On Facebook, Enriquez also posted screenshots of all transactional text messages he got, showing all the purchases made by the suspect — with transactions amounting to P150 to P900, until Enriquez’s account ran out of money. 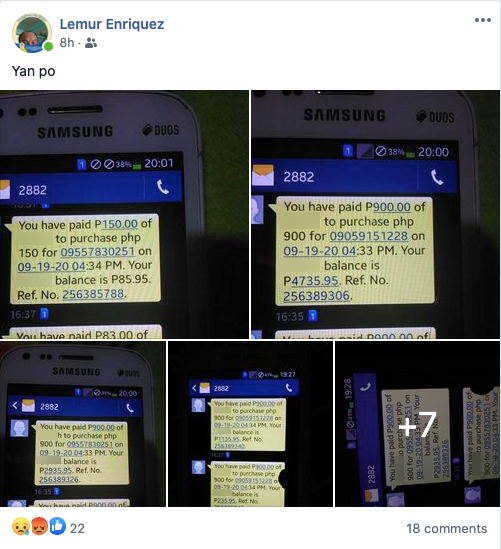 Concerned netizens who have read Enriquez’s posts on social media have been expressing their disappointment over the swindlers’ actions. Some of them tried to trace the swindlers’ identity based on the numbers from Enriquez’s transaction history and told him that one of the recipient’s names appears to be a certain Jenna Cortez. 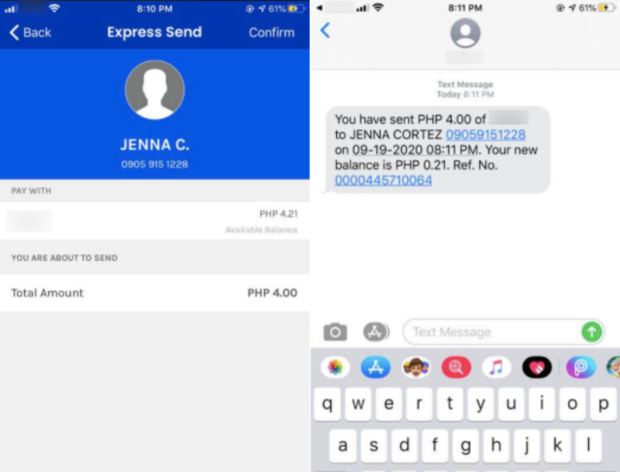 Other Facebook users also advised Enriquez not to give his personal information and pin number to just anyone. INQUIRER.net reached out to Mondejar Antonnette but has yet to receive a response, as of writing.

Early this year, the Department of Social Welfare and Development (DSWD) and Department of Information and Communications Technology (DICT) launched a mobile app called “ReliefAgad” which is intended to help expedite the distribution of government’s cash assistance to beneficiaries affected by the coronavirus disease (COVID-19) pandemic.

As soon as the beneficiaries’ identities were verified, they could choose how they would like to receive their cash subsidies: in cash, through their respective local government units, or through select financial service providers.

The Securities and Exchange Commission has also been warning the public against dealing with people making use of the COVID-19 pandemic to deceive others, especially vulnerable ones.

The public is advised to be more careful with offers or invitations to partake in schemes guaranteeing easy money, and to look out for signs of scams, especially in these difficult times. JB

Heart Evangelista to give away tablets to students with online classes

Carmina Villarroel is giving away tablets to students for online classes

Don’t miss out on the latest news and information.